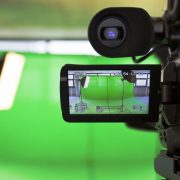 I was woken up by my 6 year old this morning, he was dressed, ready and waiting to record a video – the unboxing and setup of a new lego set. He did the whole thing perfectly in the first take, and I’m pretty sure I was still asleep whilst recording him – he just needed someone to operate the camera. His end of year kindergarten presentation was a series of videos. They hadn’t learning about video production best practices, but they certainly were learning that creating videos is straight forward, and becoming familiar with being in front of a camera.

Primary schools are taking things a step further and seem to be quickly bridging the gap between amateur & semi-professional video. When I visited St Joseph’s International School, the school’s recruitment/introduction video is a primary school production, that’s quite frankly, excellent.  They’ve got a complete studio setup (which they were keen to show the parents and to talk lots about) and they run classes that teach students about video production.

When you combine what kids are getting through formal education along with exposure to child actors on YouTube, it’s hardly surprising that 6 year olds are interested in making their own videos. To me it’s a clear indicator that the new medium of choice is going to be video.

Today most adults don’t have the patience to read a quick start guide (TLDR anyone?), do we really expect the next generation to want to read large bodies of text? Though it may sound worrying to many, I actually believe that it’s a good trend. One that’s going to change the way we deliver information and massively change the way marketers produce video. So what should you be doing differently?

Focus on Information (not bling)

The end-user expectation of high quality video productions will soften considerably. Video content is already expected to have a high quality (and density) of information. The focus is on being more informative, and less promotional.

Video is a key resource consumers use to understand new products & ideas, and learn new concepts. That doesn’t mean it has to be boring & dry, it can be funny & clever, if you’re lucky it might even go viral. Don’t plan on something going viral though. There’s plenty of theories but no one really knows what creates the viral video effect. Focus on delivering your information, if you’re funny and clever at the same time – bonus brownie points for you.

Think about the funnel

Like every piece of collateral, every video has a place inside the traditional sales funnel (awareness, consideration, etc.). Clearly define/understand where your content sits, and produce it to match the necessary funnel segment. Think about the ‘Disney Princess’, their franchises are designed for very specific audiences, and they create tightly relevant content for their audience, similarly your videos should be carefully positioned. Don’t try to be everything to everyone, and don’t assume that one video can cover the whole funnel. Yes the funnel has changed (think about ZMOT), but even in the new funnel paradigms, consumers journeys still effectively have a start and an end.

Be consistent, one video isn’t enough

No video is a silver bullet. Even the best, most viral video isn’t enough. Anyone remember this guy? You need to be consistently producing content. The key is in the word ‘consistency’. Don’t treat video as a one time effort, or as a singular campaign piece. Brainstorm all the different types of content you could produce, and think of innovative ways of generating that (don’t dismiss UGC). Over a period of time you’ll have lots of relevant content that’ll help your audience make the right decision.

“Don’t count on creating a video that goes viral overnight on your first attempt – there are no silver bullets or magic formula,” said OpenView’s Maksymiw. “Get your team together and brainstorm a bunch of ideas.”

Not everything needs to be produced by a professional agency. Sometimes the best videos are simple explainers, or live feedback videos shot & produced in-house with minimal investment. Try experimenting with different grades of production for different types of videos. You could produce considerably more  video, on a much smaller budget, if there’s a lower (more in-house) production level being applied. For instance you may have an expensive video walk-through for your new product, but have several lower cost Q&A videos or practical usage videos. Consistency is especially important here. Maintain the same production quality & style for the relevant category/type of video.