You are here: Home / Startup 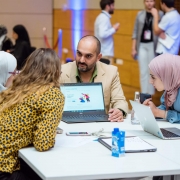 Mentoring students at the Arab Innovation Academy was probably one of the most rewarding professional experiences I’ve had in a long time. Guiding exceptionally motivated students through the process of designing, validating and launching a product was incredible. The very act of teaching them helped me learn new things, and relearn things I’d forgotten.

There were a few things that really stood out:

Critically analyze your self and your team. Identify key skill gaps, figure out what you can improve and what you need to bridge. Most of us don’t do enough active self-improvement. Experience is great, but remember to take a breath, slow down and do some studying. We’re not perfect and we need to grow, something even Siew Choo SOH the Managing Director of DBS believes!

You can’t do it alone. Accept the fact that you’re going to need help from someone that already knows the ropes. Invest time in finding mentors, some experienced hands that can guide you in specific areas. Get a few, because no one mentor can provide you guidance across all aspects of your business.

Encourage diversity of thought. Work with people that have different backgrounds, different skills and different views. Ensure they are comfortable speaking their minds. Be confident, but remember that Group Think is an easy trap to fall into, and can be deadly.

There’s a lot of value to simplicity. It isn’t easy to achieve simplicity, be prepared to work hard at keeping everything simple. Whatever anybody tells you, nothing is ever as complicated as it seems. Find a way to articulate your solution as if you’re talking to a 5 year old. If you can’t explain it to a 5 year old, you probably don’t really understand it.

Over the 10 days I spent in Qatar, it was brilliant to see the students rise to overcome the various academic challenges and grow personally as they quickly learnt real-world skills. They presented lots of very challenging questions and scenarios, which thoroughly tested me as a mentor. Ultimately those unexpectedly tough questions are really what helped me realize that it was a two way street. That mentoring was just as educational for me as it was for them. Combined with the process of academic review with the other mentors, it was mentally recharging. A reminder of how important structured learning & analysis is at every age.

Enough about me, watch the video below to see what the students felt they learnt from the process. There’s a surprisingly strong pattern in their feedback! 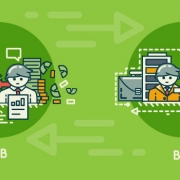 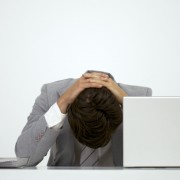 I recently answered a question on Quora about failure, having run a few startups it was something that struck home. As an entrepreneur you never believe you’re going to fail. Even when the writings on the wall, you still have this vague notion that it can work. When it’s finally buried, that’s when you stop. It’s probably a good trait for a very well funded, highly motivated (almost pathological) serial entrepreneur.

Probably not so much for a regular guy, or a marketer.   We don’t have the luxury of being able to ignore all the signs. That whole concept of failing fast & frequently, the one HBR’s been writing about and the one that Silicon Valley seems to fashionably espouse. That means you need to be able to detect failure and respond to it quickly. You should be planning to fail, or if you prefer, failing gracefully by design.

Knowing when a campaign is going wrong

In the absence of a minority-report-future-seeing-psychic, I check my campaigns against metrics and try to ascertain whether we’re on track or not. It’s a questionably better than relying a more arcane-mystic methods, but it’s certainly better than not doing anything at all.

When deciding what to track success/failure against, it’s really important to think about your campaign. Personally I believe that (for small businesses) all campaigns should only be focused on client acquisition & lead generation. Which means that all my metrics are funnel metrics (views -> leads -> conversions). If any campaign isn’t performing well, rather than throw more money into it, I’d rather cut it short and redirect the resources to another campaign. There’s an overhead of creating a campaign and running it. Especially for more offline campaigns, but that’s why you should be A/B testing even when you’re doing something as offline as an event. For example:

If you started any type of marketing campaign, and you don’t have success metrics, you’re doing something wrong. There’s a good chance that you don’t actually have a plan. Check out this guide about setting up a marketing plan. If you don’t have the time to create a marketing strategy, try to think tactically and build metrics on a per campaign basis. It’s not ideal, but it’s better than nothing at all.

Action without a plan is not uncommon, it feels better to be doing something rather than nothing. Isn’t some marketing better than no marketing? Yes, you need to do something, even if you don’t have a plan. Just be smart about it, create some metrics, monitor and manage it.  At the very least you’ll have discovered if something works or not. Don’t use planning as an excuse to sit on the fence forever.

If things are on-track, and everything’s looking peachy, it’s time for cake! Yay. Don’t rest on your laurels or get too cheeky, start thinking about your next campaign. That’s going to begin from zero, it doesn’t get any head-start from your previous campaigns.

If things aren’t looking good, don’t despair, it’s time for the campaign to die. If you ran it properly you learned something useful that’ll make your next campaign more successful – even if it’s just how to get a consistent 2% improvement in sign-ups through better offers. You should eat the cake anyway, because it’ll make you feel better & it’s silly to waste good cake.

If you don’t have any metrics to measure against, you won’t know whether it’s time for cake or death (or both). It’s probably time to have a cup of tea and watch this YouTube video: